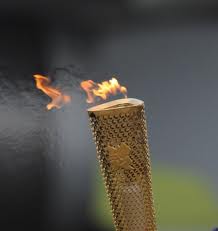 “ The Olympic Torch Relay has the power to influence attitudes and win hearts,” says James Toney, Executive Editor of Sportsbeat, award winning journalist and soon to be torch bearer.

His interest in  bringing the Olympics to London started with a story in 1999, but his interest in the Olympic movement dates much further back, to when, as a small boy he was inspired by a teacher who installed in him a love for all things Olympic: values; fairness; opportunity; spectacle; the discovery of unusual sports; elite competition. In fact the whole Olympic dream took up residence in his young imagination. He warns that his mother still brings out the photos of his boyhood self parading with a torch made from a cardboard tube from the centre of the tinfoil as well as standing proud on a homemade podium. The Olympics became his passion and this has endured, weathering the realisation that he would not compete as a sportsman and has been translated into co–founding one of the most successful sports news agency – Sportsbeat (http://sportsbeat.co.uk/content/about-us). James will talk enthusiastically about his childhood heroes – commentators, David Coleman, Harry Carpenter and High Porter. It was the latter who, when James, the boy, was introduced, invited him to sit beside him while he commentated.

I could have listened to his stories for many hours more but three lattes’ in to the interview, we returned to the task in hand – the Torch Relay. James explained about the cavalcade that accompanies the torch on its journey – he likened it to that which precedes the Tour de France – another interest that threatened to side-track us – however, he went on to tell me about the buses that take the torchbearers from place to place en route, about the move from one bus to the ‘advance ‘ bus as the runners leg approaches, about the police outriders – always a great draw for a crowd, the drop off and then the wait.

The runner is surrounded by security and police. James was quick to say how he has been impressed with the light touch of the policing surrounding this event. He also has tales of people whose reaction to the relay, which brings the Olympics to small roads and communities, nationwide, has moved from slight interest during the wait to amazing enthusiasm once the torch passé close by. This he says is the power of the torch for Britain. It inspires and excites and moves the most hardened ‘can’t wait til August is over’ individuals in the crowd.

Of course, on the morning I spoke to James, he was telling what he had observed. He does not actually participate until June 26th, when he will run his 6 minute leg in Lincolnshire, where he has family ties. He will be taking along his own army of supporters, including his parents, wife and young daughters and they will all celebrate in the evening with the other runners of this leg at a celebration in Cleethorpes.

The following Monday, he will take his torch into our local primary school for every child to see and touch as he tells his personal tale of the relay. He hopes that in this way – the bringing of the torch to the people all over the country, and especially to schools –  a similar flame may be kindled in other youngsters as was for him by the enthusiastic teacher of his schooldays.

I will be there at the school, and it is then that I will corner him and make him find the words to explain what he felt that moment when the flame was handed on to him as he claims it is likely to render him speechless. Somehow I doubt it!

To watch video coverage of the relay or to see where it is and when, go to http://www.london2012.com/torch-relay/

To view this and other Olympic Stories I have written go to
http://www.btlondon2012.co.uk/storytellers/MeetStorytellers-Pages/STbio.php?newcode=7

4 Responses to The Torchbearer – James Toney