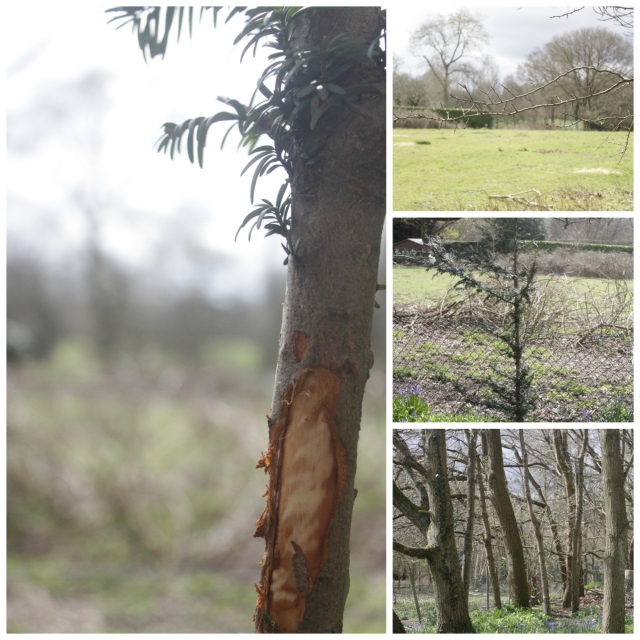 In benign spring sunshine the field waits, as all fields are waiting, for the burst of bud and spurt of blade to finally wake after the long winter. Dotted about are signs of scattered feed for vanished ponies. An abandoned bucket, its garish pink foreign in the muted landscape, steals the eye. The silence of the field is profound, the thud of pounding hoofs, joyful snicker as winter coats are removed, soft whinny to greet open palms offering apple cores a mournful echo.

Behind the fence at the field’s margin the tree stretches its barely formed, darkly needled branches, as a cat might stretch to greet the unexpected warmth of the sun. The scar on the young yew trunk seeps sweet sap as it rises to greet the call of the season. The sapling is ignorant of the deadliness of its wound.

Hanging in the air are the anguished screams of the girl whose pony sinks to the ground with a sigh. Rendered ungainly in death by the poison in its blood it stumbles, rolls, stops. She falls to the ground by its side, burrows against the fading warmth of its belly. Night’s peace rent by sorrow, harrowed faces leaping by torchlight as the field is cleared of companion ponies. The shadow that remains of the girl almost the last to leave.

Revealed in the scant light of dawn a shape, muffled, beneath grey tarpaulin…and at the extremity of the field the scratchy design of the young, condemned, yew.

The field waits in the Spring sunshine for it knows not what…maybe forgiveness for sparse growth, for not yielding sweet scent strong enough to mask the invitation of rising sap which tempted the horse to nibble poisonous bark.

I wait for time to blunt the screams that woke me in the night, the sight of the dead horse in the field beside my garden which was revealed as the light bled into day.

The yew waits, probably to die from its necklace of exposed core.

I am a writer and a poet.
View all posts by SallyJ →
This entry was posted in death, garden, melancholy, natural world, Uncategorized and tagged Nature, Poisonous Yew, Spring. Bookmark the permalink.

2 Responses to The Young Yew